The update of the Comprehensive Plan for the City of Johnston was the subject of a special meeting of the Johnston City Council and Planning & Zoning Commission on Monday, September 30, 2019. The Council and Commission received an interim report  from Brad Scheib, HKGI consultant, on the input that had been received from citizens and stakeholder groups over the summer months. 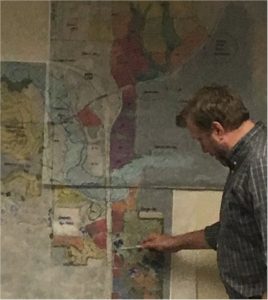 Council members, commissioners and staff discussed next steps including a review of the guiding principles for the current (2030) Comprehensive Plan and a preparation of a refined version of an interim report including information about various policy issues and implementation plans. The Thrive 2040 process will address various updates to the current plan as well as focus on some key geographic areas for new development and redevelopment. Focal points are expected to include the north annexation area along HWY 141 and Saylorville Drive (pictured on left), the Merle Hay Road corridor between the gateway and the planned Johnston Town Center, and the west and northwest portion of Windsor Office Park.

The next round of citizen and stakeholder engagement is expect to occur later this year, possibly between Thanksgiving and Christmas. Some updated information may also be available for the upcoming Johnston-Grimes Economic Development Bus Tour  on October 16. Watch for further updates here.