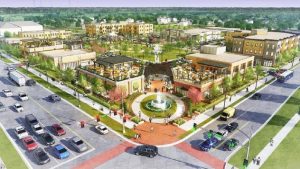 Attention Developers and Investors. The City of Johnston has formally posted a Request For Qualifications (RFQ) relating to the Johnston Town Center Project. This project is a primary focus of development for the community, and the City of Johnston is seeking qualified partners to develop the area located at the intersection of Merle Hay Road and NW 62nd Ave. Interested parties are asked to respond no later than NOON on Monday, May 7, 2018.

In conjunction with the release of this RFQ, the City has modified its TIF policy to provide additional benefits for projects in the Town Center and Merle Hay Road Gateway areas.  Specifically, projects will be considered for funding up to the equivalent of 75% of the segregated incremental property taxes for up to ten (10) years. The city will also consider mutually beneficial infrastructure improvements for which the incurred costs may be discounted against other TIF funding.

This location is a primary node of traffic and activity in the community, and several high quality multi-family housing projects have recently opened in the vicinity (Cadence and 62W). A Community Survey conducted in 2015 revealed that 79% of respondents wanted the City of Johnston to put an emphasis on bringing additional retail and restaurants to Johnston.

A market study was conducted, and a plan has been developed to transform the area surrounding City Hall into a Town Center for retail, dining and other mixed use. Design guidelines have been developed, and the City of Johnston has been working to acquire properties for the project. It is expected that in 2018 the City will take steps to make this “super block” ready for development.

Developers and investors are needed to help fulfill the vision expressed in these initial plans. For more information contact the City of Johnston Economic Development Department at 515-727-7774 or email Adam Plagge at aplagge@cityofjohnston.com.