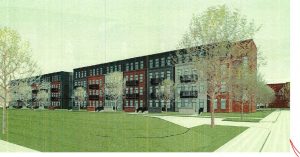 At their Council session on May 15, 2017, the Johnston City Council approved a site plan and preliminary plat for the development of 384 one and two bedroom apartments at 6454 Merle Hay Road and adjacent properties in Johnston. A companion parkland dedication development agreement was not approved, but may be considered at a future meeting. View the most recent site plan documents here. The location is generally south of the Johnson Brothers facility. The development includes five three-story brick apartment complexes to be developed over the next six years. The first phase would be completed in December of 2018.

The price range for the apartments is expected to be between $850 -$1050 and would target young professionals. Based on a projected assessed value of $42.6 million, a TIF rebate of up to $2.6 million could be provided to the developer over five years. For more information about this project, download the previously published staff report here.