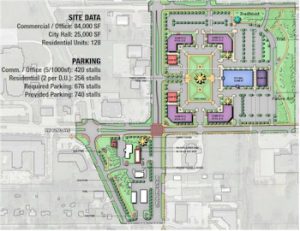 The Johnston City Council and Planning & Zoning Commission met in joint session on May 22, 2017 to consider the input received about the various concept plans for the area. See the previous article for more information about the alternative plans.

In summary, based on the input received the “Town Center” concept was the overwhelming favorite. Those who provided input in the planning process also expressed a desire that the future development include restaurants and public space for the farmers market and other activities, and a trail connection. Commercial retail uses were also desired. Support for maintaining City Hall as an “anchor” for development was also mentioned.

The population in the market area (3 mile radius) is estimated to be almost 40,000, or about 15,000 households – 75% of which are owner occupied. Consultants shared data which suggests that the location would be attractive to retailers and other commercial interests including: average household income = $105,000; and 50% with a college degree.

The next phases of the planning process will include the development of design guidelines, cost estimates for infrastructure, property acquisition, and the construction of public amenities. In the future there may be a request for proposals for developing the site. It was noted that the development phases could cover a period of up to 15 years.

It is not too late to provide input about the plan. Send comments to Adam Plagge, Johnston Economic Development Manager.