Local Option Sales and Services Tax To Be Considered 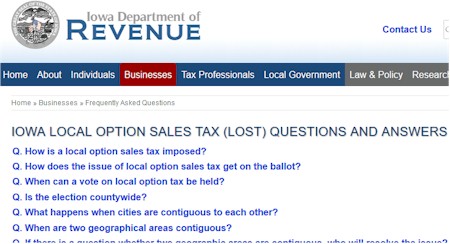 The City of Johnston may be joining other Polk County communities in requesting a special election on March 6, 2018 for a Local Option Sales and Services Tax (LOSST). A sales tax election may be initiated by motions from the governing bodies of communities which collectively represent at least 50% of the population of the county. A simple majority of  the voters in the combined contiguous cities must approve the tax before any of the cities can collect it.

At their work session on December 4, the Johnston City Council discussed the issue, the required timelines and possible ballot language. The deadline to submit a resolution to request a March 6, 2018 special election is December 12, 2017. The council will discuss the language at a meeting on December 12th and if there is agreement on the language, a separate resolution adopting the ballot language could be included in the December 18 City Council meeting agenda. The Council has reviewed ballot language that was used by several communities in the successful Sales Tax vote in Dallas County held on November 7, 2017.

Several Polk County communities are have already approved petitions to conduct an election.

Based on information provided by the State of Iowa the estimated amount of annual sales tax funding (based on FY16 projections) for Johnston is $2,576,420 (3.19% of the total collections in Polk County). If 50% of the sales tax funding is used for property tax reduction, it would reduce the property tax levy by $1.02.