The next phase of the Merle Hay Trail project will proceed with the approval of a contract to construct the trail segment between NW 62nd Avenue and Merle Hay Road via NW 59th Court. Johnston residents will be able to connect from the NW 62nd Avenue trail, travel north on the trail adjacent to NW 59th Court, then jog east to Merle Hay Road between St Paul Presbyterian Church and the new Brick Towne apartment development. A bridge will be constructed over the drainage area which runs parallel to NW 59th at the point where the trail turns toward Merle Hay Road. Imagine being able to take a trail north on Merle Hay to NW Beaver Drive, then remaining on a protected trail all the way to the Walnut Ridge Recreation Area. 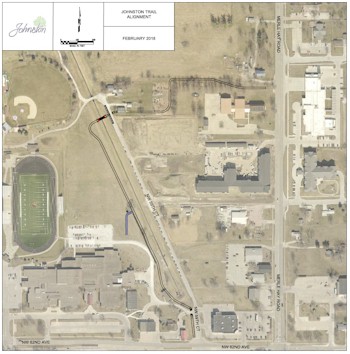 At the meeting held on February 19, 2019, the Johnston City Council awarded a contract in the amount of $330,000 for the construction of the trail segment this spring and summer.