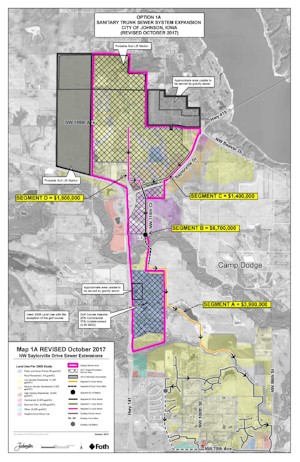 At their work session on December 4, 2017 the Johnston City Council began consideration of a plan for annexing areas north of the current City limits and along Saylorville Drive. The City has received an annexation petition from seven property owners representing approximately 537 acres. Property held by Camp Dodge would be included in the plan, along with property recently acquired by the U.S. Navy.

In the scenario presented in Figure 2, the proposed annexation would include all of the colored properties and be 100% voluntary, excluding government property which does not require consent. Download the complete staff report here.

City staff is expected to proceed with further study including infrastructure engineering, easement planning, environmental reviews, and an update to the City’s Comprehensive Plan. Infrastructure installation (sewer and water) will likely be deferred until a high-quality project has been identified. It is also expected that City development policies will be structured to encourage swift development through a combination of incentives such as utility connection fee escalators.

This is not a new or unexpected development. Since 1998, the area along Saylorville Drive to the north/east of Highway 141 has been identified as a future growth area for the City in the Johnston Comprehensive Plan. There are 714 developable acres in the area including Beaver Creek Golf Course and Hoyt Tree Farm. An additional 700 serviceable acres have been identified in the area north of Saylorville Dr, making about 1400 total acres potentially available for development. 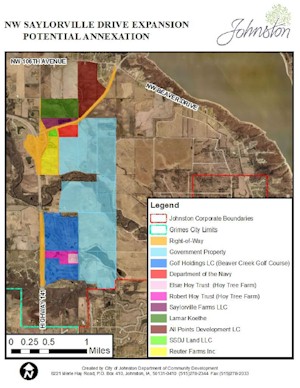