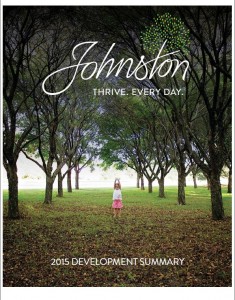 The Johnston Community has experienced considerable change over the last year. From one corridor of the City to the next development and change can be observed. Along with growth and development the population of Johnston continues to rise. A special census is currently being conducted and it is predicted that population will exceed 20,000 residents. As we proceed into the new year it is important to take note of the development that occurred in 2015.

David Wilwerding, Community Development Director for the City of Johnston, has prepared a 2015 Development Summary which includes information about population growth, new commercial and residential development and public infrastructure. Below are a few highlights from the report.